The racist dynamics of the anti-street harassment movement have been well documented. Many Black women and people of color have taken the organization Hollaback! to task, calling out their intense focus on the experiences of white women and the dangers that harassment poses for them.

In 2014 Hollaback! famously released the video of actress Shoshana Roberts marching her way through the streets of New York city. For more than 10 hours, Roberts is recorded being harassed, highlighted as the target of catcall after catcall, and there is a brief period where a man follows her. Hollaback! released the video to praise akknd congratulations within their community. Roberts published a blog for the New York Times, “Becoming the Symbol for Street Harassment”.

I watched it unfold with the other (former) members of Hollaback! Cleveland, and waited. Despite my better instincts and a firm understanding of systemic bias, white privilege, and institutional racism, I knew surely there was an explanation, and what seemed to be an intentionally racist and exploitative project had merit. Right? So we began to ask questions internally about creative control, planning, outlining, and intent. We were deeply disappointed.

Explanations that followed shifted the blame to the director, Rob Bliss. Instead of taking responsibility for handing over such a sensitive project and ALL creative control, Hollaback! blamed a lack of time. When we asked why they chose to replace a woman of color with a white woman, they blamed their lack of creative control. More interested in “moving forward” than accepting responsibility, Hollaback! encouraged us to close ranks and center “the work”.

A few weeks later Hollaback! released the video of Elisa Lopez, a young woman they had been grooming (I use that phrase intentionally) for months to release her story and the full video of her sexual assault on a train. The video restarted the conversation internally about Hollaback!’s willingness to advance their mission at the expense of black and brown bodies. 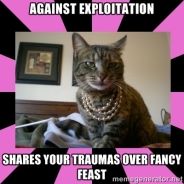 Could Hollaback! Cleveland be responsible for co-opting this story and posting it for consumption? We as organizers had no knowledge of the process that brought Elisa to Hollaback!, but we were not comfortable with releasing her story without knowing the plan to provide care and safety for her after her story received national attention. We pushed back on Hollaback! for an explanation, and were disappointed once again.

In December 2014 Hollaback! approached me and asked me to write an op-ed for their national page. The focus: #blacklivesmatter. I was taken aback by the request. Hollaback! had consistently ignored many of the national stories of police brutality, which is a urgent and pressing street harassment issue that impacts Black people disproportionately. Hollaback! had chosen not to focus on the murder of Black trans women. And what was most egregious in connection to this request was their willful refusal to update their mobile reporting app with the option to report experiences of police brutality as street harassment.

Seething, I still considered the offer. This would be a chance to write about the missteps of the organization, a national platform. It was clear that Hollaback! was leveraging my blackness, my militant perspective for their personal gain. I carried my thoughts through the New Year celebrations and ultimately declined. The history of white organizers leveraging blackness to legitimize their campaigns cuts deep, and I was not willing to be complicit any more than I already was.

Hollaback! Cleveland had their first meeting of the new year, we talked about the issues that face Hollback! and what forward steps looked like. I proposed a departure; Hollaback! as an institution practiced racism by relying on the narrative of dangerous men of color, it did not focus enough on marginalized bodies, and the organization had attempted several time to hijack the stories and efforts of black and brown women.

There was hesitation, and the topic was tabled. We continued to hesitate for months, into the summer and as we approached Pride Month.

As I insisted on moving forward on a campaign focused on black, brown, and trans bodies my fellow organizers balked. They were not convinced that this was the way to go. Another local organizer, the only other Black woman on the team, made the point that the branding of Hollaback! was already in place, and easiest to work from. I found this deeply disappointing.

As Pride Month approached, I took responsibility for registering our organization, social media, and centering our efforts on black people. Pride is historically political, but

presently marginalizing. Black, brown, and trans folk speak often about Pride’s inability to show up for them as a community, instead choosing to focus on the priorities of cis, middle-class white people.

With little support and initial pushback, I made a decision, to prioritize black and brown folks during our Pride march. I spoke with and partnered with Get Equal, an advocacy group which advocates for LGBT social and political equality through confrontational but non-violent direct action, to plan a march featuring black people only.

The members of Hollaback! Cleveland went ballistic. After nearly a month of planning and updates, they feigned confusion. They asked how the focus fit into our mission. They wondered about the role of white people in this. They expressed feelings of betrayal. A few days later, and a day before Pride, they sent a collective email asking for my departure from Hollaback! Cleveland.

It was clear to me then, and remains clear to me now, that their accusation of bullying calls upon racist and sexist tropes which paint Black women as angry, uncompromising, and violent. When Black women refuse to center whiteness, this is how we are labeled.

I politely declined to step down as organizer, and refused to apologize for organizing a march that insisted on centering blackness, but offered to be open to speaking about their feelings. The three organizers promptly resigned, and took to their Facebook pages to distance themselves from the pending action, from me as an organizer, and from the actions of Hollaback! Cleveland.I questioned my work, I questioned my experiences, I questioned my right to organize with the community in mind first and white feelings second.

Cleveland Pride was rained out, and post what would have been Cleveland Pride, the organizers expressed interest in speaking, which did not surprise me, but validated my disappointment in their willingness to cement whiteness at the expense of my personhood. It seemed that I was no longer “violent” and that things could be resolved.

Until today, I remained the sole organizer of Hollaback!, but I can no longer support an institution which continues to profit off of the efforts of black women, of queer and trans communities who choose to share their story without compensation, and center whiteness as its mission.

I speak to other radical, Black women who organize and center their work on their Black communities. They remind me of the ways that my independent work is valid and that my primary priorities continue to be “tending to my people”. I cannot do this while still being accountable to an institution that shirks away from addressing its own relationship with the military that is police, that relies on carceral feminism to prioritize, fund, and sustain the violence that is killing Black people, and that continues to ask local organizers from marginalized communities to continue the very difficult and expensive work without validation.

I refuse to be accountable in that system. I am accountable for the preservation of my people. Only.