Greece is no crisis. Greece is a revolution against the banks, imperialism and capitalism.

Greece owes about $300 billion and apparently some organization wants that money back. 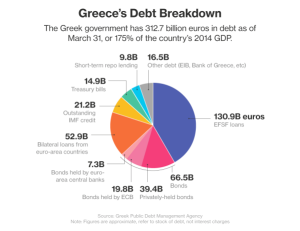 Just for reference, according to Reuters Citibank got a $306 billion bailout from YOU. Your tax dollars gave a private company money. I’m being very conservative, some people say it was a over a trillion dollars.

Sometimes the biggest thing you can do is say, “no” or in the case of the Greek, “oxi.”

One of the consequences of the “no” vote to austerity measure may be Greece being thrown out of the Eurozone. The Eurozone is a monetary union of 19 of the 28 European Union (EU) member states which have adopted the euro (€) as their common currency.

Another consequence is possibly being thrown out of the EU altogether.

The EU has brought nothing, but US style brutal capitalism to Europe. The only people the EU has helped are the very rich and their banks.

It’s time across the world we say loudly and firmly, “ENOUGH, no more!”

Enough with turning corporations into countries and people with proposals like the  TPP in the US the and the TTiP in the UK.

The bankers should be in jail along with the people they work for.

The editorial media, which is now in shambles, will be publishing essay after essay on how the “Sky is falling in” Greece. Those articles essays will be nestled between JP Morgan and Bank of Scotland ads.

It is their job to scare you from even voting no.

Since 2011 Greece has been under the following austerity measures:

•The public sector wages was cut by 15 percent.
•Education spending was cut by closing or merging 1,976 schools.
•Social Security was cut by 1.09 billion euros in 2011, 1.28 billion in 2012, 1.03 billion in 2013, 1.01 billion in 2014 and 700 million in 2015. Means testing was implemented and the statutory retirement age was raised to 65 from 61.
•Higher property taxes and an increase in the value-added tax (VAT) from 19 percent to 23 percent.
•Excise taxes on fuel, cigarettes and alcohol will rise by one-third,
•The government privatized a number of its enterprises, including the Hellenic Postbank, several port operations, Hellenic Telecom and will sell its stake in Athens Water, Hellenic Petroleum, PPC electric utility and lender ATEbank, as well as ports, airports, motorway concessions, state land and mining rights,
•Only one in 10 civil servants retiring will be replaced and one in five in coming years.
•Health spending cut by 310 million euros in 2011 and 1.81 billion euros from 2012 to 2015.

What did 60% of Greeks voting no for:

The first year of austerity measures in Greece suicides went up 35%. I’m not sure how much louder Greece can yell “uncle” before the EU gets the fuck up off them.

On Sunday, July 5 the rich and the hope to be rich one day voted yes for the austerity cuts (which was also a vote to stay in the EU, not literally, but kind of…) and the rest of the country voted no, here’s why:

Lorena Mexi, also a university graduate in her 20s, said she too had been thinking about her future when she went to vote yesterday, but had come to a quite different conclusion. “I voted no,” she said. “I have a degree in political science. And I’m a waitress. I have two jobs. I work up to 10 hours a day and up to six days a week for €700 a month – and that’s with tips.

But what is this really about. Why is EU being so hardcore with Greece?

Because Greece elected  Alexis Tsipras of the Syriza Party. Tsipras is a leftist who is for the people (if you’re in the US, imagine if someone from a third party actually took a shower and put on a suit and manage to run a campaign with the idea that they could win, yeah that’s who Tsipras is.)  The leaders of industries can’t have a world leader who is for the people succeed, so everyone including the US is talking about how this will be a disaster.

The disaster won’t be because Greece said no to cutting off its other arm. The disaster, IF it happens, will be calculated and because the EU and the world powers want to teach not just Greece a lesson, but Portugal, Spain and any other potential lefties out there that if you try to leave and not “behave” life is going to be very tough for you.

They are kind of like, “Haven’t you learned? Did you not see what we did to Africa? Don’t think we’ll let your European status stop us from doing you the exact same way. Remember WW I and II?  We killed almost everyone. We don’t care.”

That is very simplified, but it’s pretty much that.

Check out this great analysis at Vox “:11 things about the Greek” crisis you need to know Matthew Yglesias

The people of Greece should be an inspiration to not only the rest of Europe, but to North America, South America and Africa.

Who decides what is debt and what’s not debt? And who decides when it is to be repaid? What is repayment?

Let us philosophize about that. (I got that from the Greeks, that should wipe out at least $100 billion.)

And how long do you need to remain on your knees to thieves? The IMF is a thief. The EFSF is a thief. I can say that since I’m in a country their members helped steal and the descendant of people they helped kidnapped, so I have personal anecdotal evidence they they are indeed murdering thieves.

What we can all do now is keep an eye on Greece and keep saying no. No to cuts, no to more bailouts, no to million dollar housing, no to debt and no to poor wages. No more negotiating with people who already broken your arm and your leg and put you out of your house.

How long is going to take for the public to figure out that corporations don’t see us as people?

The crisis is perspective.

Not paying back money to a thing is not a crisis. Not eating, because you have to pay back money to this nameless sociopathic monster that calls itself a bank, that’s a crisis.

The crisis has been averted.