In this white supremacist system that leeches our self-worth, our actual fiscal worth —and sometimes, in the most tragic cases, our lives, we need the validation that comes from other Black women to survive.

It’s imperative that we speak up and out for each other. Check your newsfeed if you doubt it.

A  July 2015 New York Times article (not linked because fuck ‘em) highlighted women’s tennis champion and superstar, Serena Williams. Under the guise of praising William’s “unique” muscular frame and self-esteem, the article pitted her physique against her “more feminine” white competitors focusing mostly on their choices and commentary.

What resulted was the typical; descriptions of white ideal body types, a repulsion to weightlifting, an insistence on “looking like a girl” and “masculine” as a pejorative.

Though not a contender by any means to Serena, Maria Sharapova is the highest paid female athlete in her field. Her whiteness is prized by advertisers and they continue to use it to sell their products. Though Serena should be the clear choice for any advertiser interested in name recognition, her black female body isn’t valuable enough to consumers.

Maria was even asked by the article author to weigh in:

“Maria Sharapova, a slender, blond Russian who has been the highest-paid female athlete for more than a decade because of her lucrative endorsements, said she still wished she could be thinner. “I always want to be skinnier with less cellulite; I think that’s every girl’s wish,” she said, laughing. “I can’t handle lifting more than five pounds,” Sharapova said. “It’s just annoying, and it’s just too much hard work.” 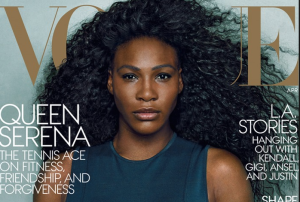 black women. It is even tolerated within the sport. For examples, see Caroline Wozniacki’s humiliating Hottentot impersonation of Serena.

In response to the racist comments posted in the wake of the article, black women set the internet on fire with images of Serena being beautiful, being fierce, being athletic, and generally being “fresher than you”. If you doubt that, please see the Serena “7/11” (Bey, duh) remake video and gather your entire life.

There was no shortage of affirmation for Serena Williams, who also reached up and claimed her own truth, posting images of herself looking quite flawless as she celebrated her continual reign and uninterrupted beat downs on the tennis courts.

Speaking truth to power, and this white supremacist environment is the power, is necessary, especially when we speak not for ourselves but for OTHER black women who have less power, less access, and less agency.

Black women are on the front lines in the fight against police brutality. We steer grassroots and non-profit resources and aide for survivors of sexual assault and domestic violence, constantly making space for the voices of marginalized folk.

Black and brown trans women are leading the fight to stop detention and deportation practices by the US government.

Black women have been blueprinting liberation movements for wage equality, reproductive justice, and environmental justice before hashtags. We got this.

Black women must continue to use our platforms to speak, create, and hold spaces for black women to defend ourselves.

When we do not speak for each other we create a margin. We signal to white people and those who do not identify as Black women that there are exceptions to the rule, and that Black women are unprotected.

Black women are not jokes, we are not punchlines, and we are not mules.

We have each other and as long as we have US, we will never run out of resources.

Stan is a slang term. It sometimes means stalker fan..but it also means to defend without apology